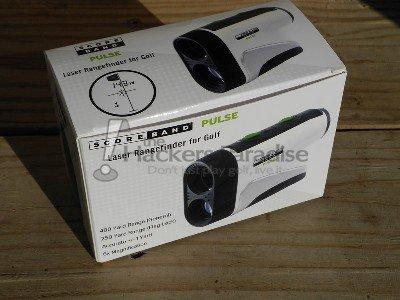 Completing a line of affordable distance-measuring and score-tracking devices, the ScoreBand PULSE rangefinder seeks to provide precise yardages at a significantly lower price than others on the market. 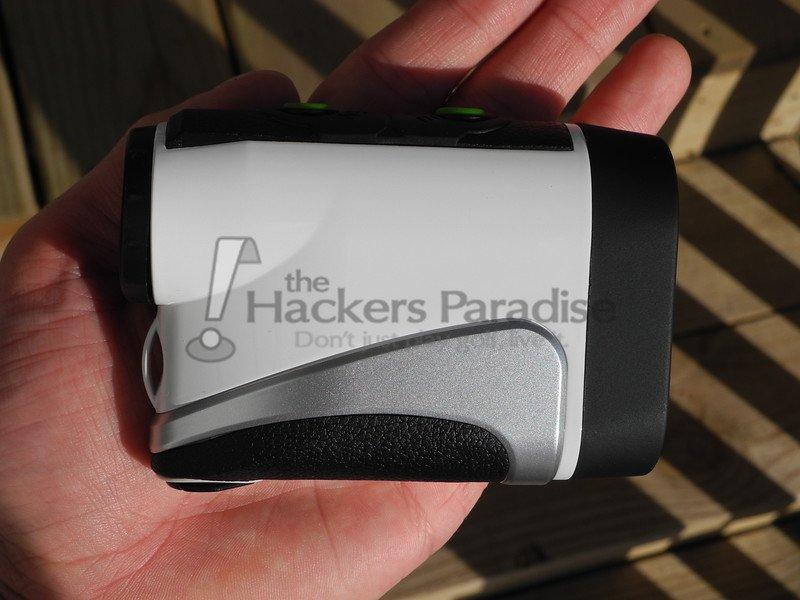 Though we’ve recently seen a small explosion of technology advancements in laser rangefinders, the most basic feature (distance measurement) is important enough that a unit can be viable without a large number of bells and whistles. That becomes even truer if we consider price, as the market leaders’ offerings often come with a hefty price tag. The PULSE is in many ways a bare-bones rangefinder, which leads to maybe its most impressive feature – the $179 price tag. Assuming the unit works, which we’ll delve into later, the price of the PULSE will be highly attractive to many consumers.

At 150g in weight, the PULSE is certainly lightweight and its size dimensions allow for one-handed operation and easy storage. Some of the weight savings likely come from its plastic casing, which does present some concerns in regards to long-term durability, but testing didn’t indicate any issues over the course of a month of testing. Also, it does come with a carrying case and one-year warranty, assuming one takes the time to register the device with the company after it is purchased. 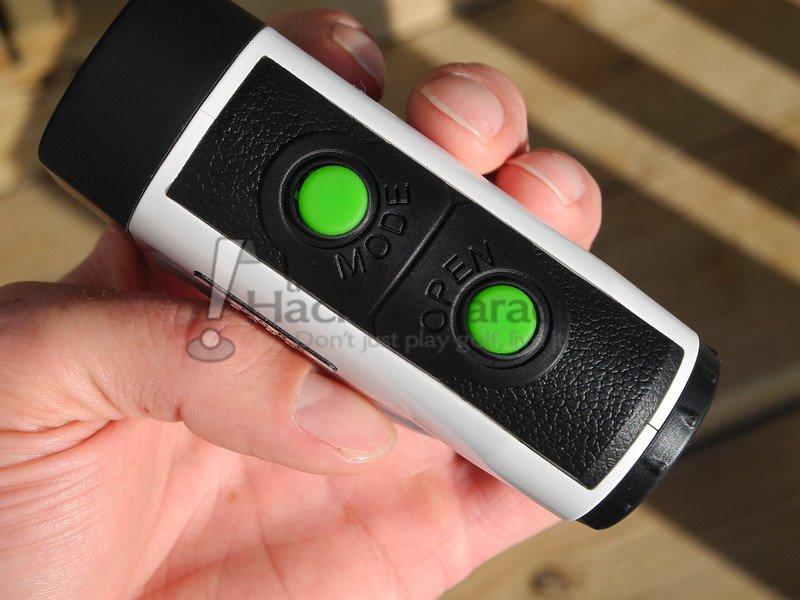 The white/black casing is attractive the eye and the two green operation buttons are situated in a way that they are easy to find without needing to look for them. The OPEN button is the one pushed to activate the unit and engage the laser. Interestingly, the first push does both of those things in tandem, so if you’ve pointed the unit anywhere other than the target, the first thing you’ll see in the viewfinder is the distance to whatever the unit was pointed at. The MODE button cycles between the two modes (general and flag lock) and either meters or yards, depending on whether you press it or hold it down. 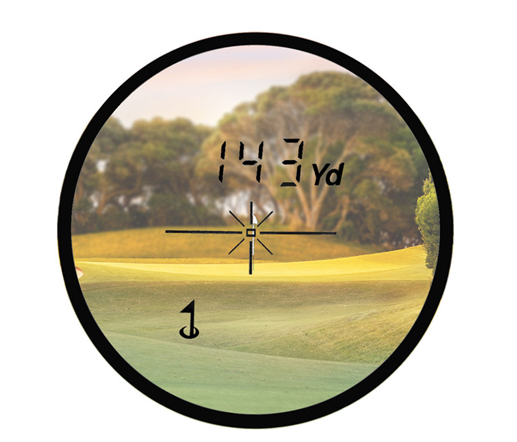 The screen in the viewfinder is clear with black reticles for aiming at the target. A press of the OPEN button will first display the diagonal lines seen above, and once the distance measurement is obtained they disappear and the yardage number is displayed. Flag Lock mode is said to improve performance by blocking out background objects and is indicated with the small flag shown in the picture above (it is gone in General mode), while General mode gives equal priority to all objects.

In summary, the PULSE was easy to use and carry and attractive to look at. It lacks many of the accessory features we see in higher priced units (slope, vibration, etc), but that is understandable at the price point. 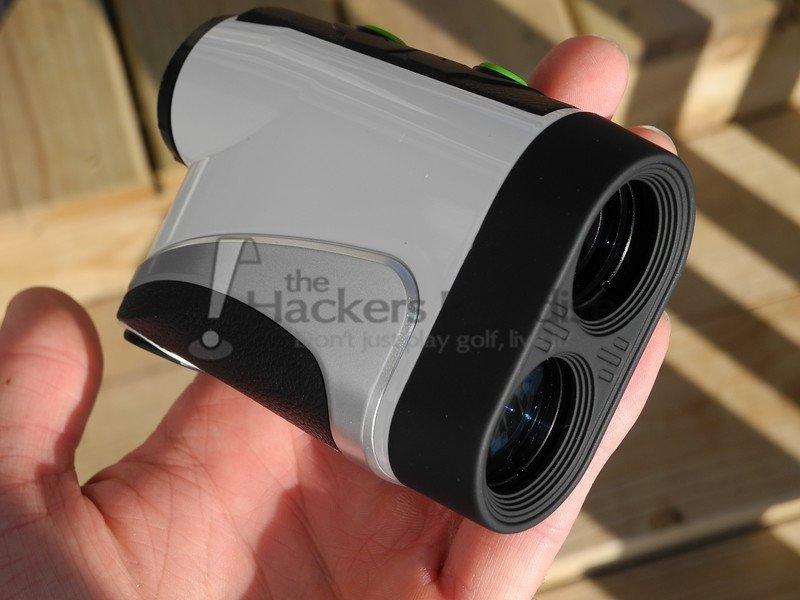 There are two main focal points that we look at for basic rangefinder performance. The first is the accuracy of the distances provided by the unit and the second is how easy targets are to obtain.

Testing on the accuracy of the distances provided was done using both a GPS unit (for ballpark figures) and another well respected laser rangefinder (for precise comparison). This method showed that the PULSE was consistently accurate to a yard or so, indicating that its capability to measure distance is right in line with what one would expect from a laser rangefinder. Once locked on to a target, the distance was displayed almost instantaneously. 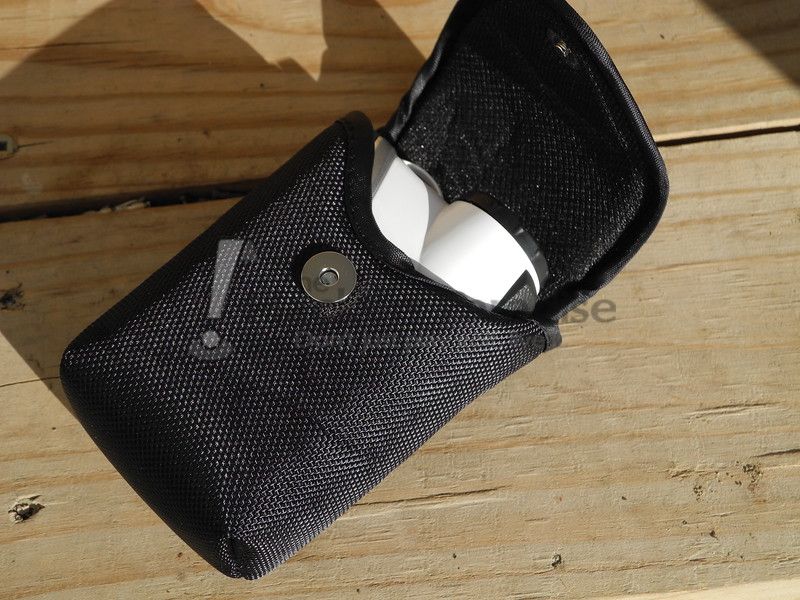 There were some issues with target acquisition at first, which were mitigated with some adjustments to the device. Curiously, Flag Lock mode proved to be frustrating at times, as it was often very difficult to avoid getting readings to background objects like trees behind the green. There were many instances where multiple attempts at locking in on the target were necessary before a valid reading was displayed. This could have presented an issue for those playing an unfamiliar course or those without good depth perception. It should be noted that this issue was experienced using both one-hand and two-hands and the reviewer doesn’t have any notable issues with shaky hands. However, switching the unit to the General mode seemed to clear this issue up for the most part. While still not quite at the level of some competitors (it still occasionally took more than one attempt to acquire a target), the PULSE did perform in a manner that was reasonable considering the price of the unit, especially after being placed in General mode.

At $179.99, the ScoreBand Pulse brings the laser rangefinder to a new group of potential consumers and does so in a compact and attractive package. While there were some target-acquisition issues observed in testing, finding the correct mode did seem to mitigate them and all valid readings were spot-on for accuracy. More information on the PULSE, including ordering instructions, is available on the company’s website, www.scoreband.net.