It has been long discussed on THP that putters, despite seeming so simple on their surface, are an area where ample creativity and advancements can be made through a plethora of size, shape, and material alterations. Sentio Putters entered the market in 2016 with a visually and technologically different take on the insert putter, and from that came their Sierra 101 line featuring not one, but three different insert densities. The goal, to provide a higher MOI design that allows the user to hand pick the insert type which fits best for the courses they typically play. 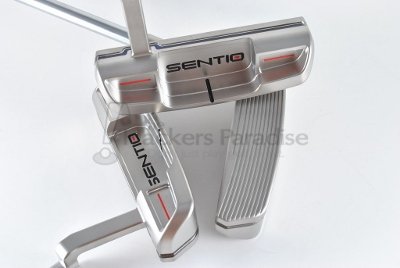 Sentio Golf develops the most innovative and technologically advanced putters on the market.

We know that feel is personal, and just one option won’t appeal to everyone. That’s why the Sierra 101 is available in 3 models, allowing players to select the level of dampening and specific color to suit their preference.

With the Sierra 101 putter design, Sentio is fully focused on what they call their “Dynamic Response” technology. Essentially, they believe to this point insert putters have simply been created as one-size-fits-all, and because of that the “feel” leaves some users to miss out on the performance benefits of insert designs because of a personal preference. To address this, the company has designed the Sierra 101 to be available in three different durometer polymer compressions (70, 80, and 90) which lets the user select how firm or soft they want the insert to feel behind the principle that softer usually appeals to those on fast greens and more firm to those on slower greens.The Idea: 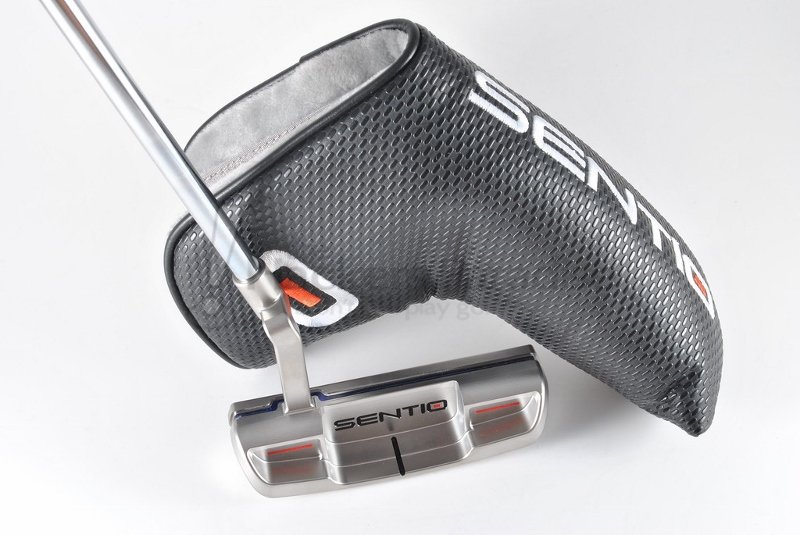 Rather than just using a standard insert, Sentio elected to use a “floating face” insert that was sandwiched between the 303 Stainless Steel body and a 304 Stainless Steel face cap. The weight that the insert saved actually allowed the blade design to be manipulated to increase MOI and the use of a stainless face cap as opposed to the aluminum we have seen in somewhat similar designs makes for a more solid feel/sound at impact, blending insert and milled traits. Additionally, the face has variable depth channels on it to impact the roll retention on misses. While the eye certainly goes to the insert and the color, there is actually quite the tech story here, and an interesting concept at its core as well.

Visually, there is a lot going on with the Sierra 101. Although the company elected to go with a plumber’s neck blade because it is a putter style that appeals to an overwhelming section of golfers, they definitely did not just copy and paste the look and design. The shape is very standard where heel-to-toe length and flange width is concerned, but the mass of the floating insert has allowed Sentio to manipulate the placement of weight to help increase the overall MOI. Besides the insert, when looking at the putter from behind, one can notice that the bumpers have been very much subdued when compared to a traditional Anser shape. 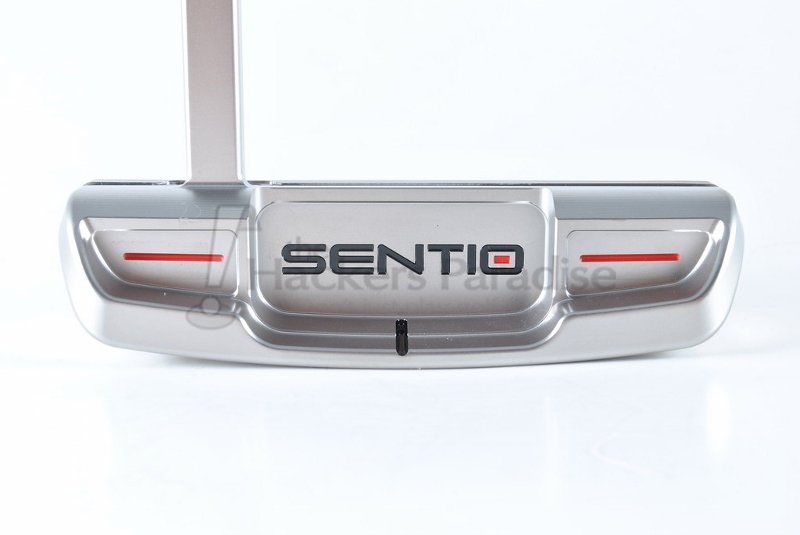 While this has been an interesting look for some to get used to in hand, when the putter is placed at address the shape looks right on par with any other bladed design. The insert though, is without a doubt what will take the most acclimatization.  Although, it legitimately serves as a face angle alignment reminder, it is very much outside the box. The other visual aspect to the inserts are that Sentio has tinted each of them to represent the feel that is in play. As shown in the pictures, thanks to the tint and the transparency of the insert, when a light source is placed behind/under the putter they are very bright. However, it is important to note that when on the course this is not the case, the inserts become very much dark/muted with only the slightest hints of color that should put distraction worries to rest. 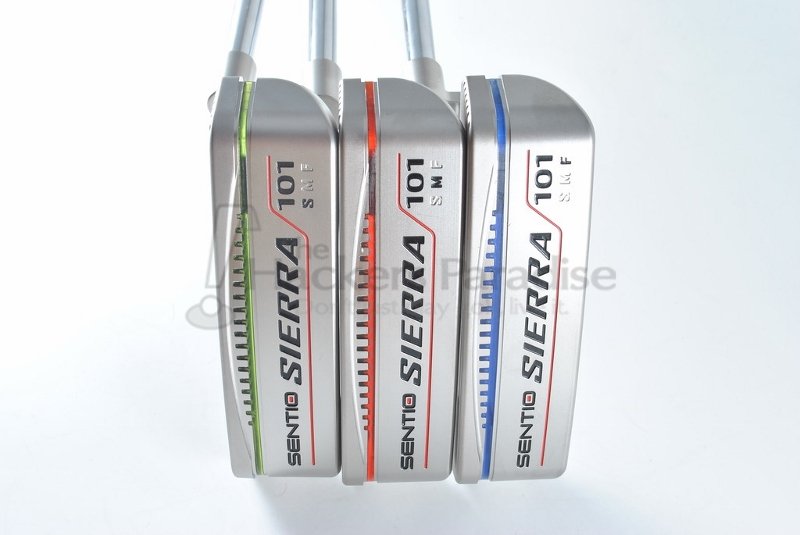 The general look for the Sierra 101 definitely has an industrial undertone with sharper edges but in hand the quality stands out, particularly in the finish. While the satin silver look on a putter is not this reviewers favorite, the silver PVD is very clean and does a great job preventing glare while showing off the intricacies of the putter design, particularly the face cap. The company has released a limited edition version of the Sierra which features a black PVD, so it will be interesting to see if that becomes a standard option later. The rest of the putter is rounded out with clean engravings and a black and red paint motif that has been a bit hit or miss among THP readers. It is actually the opinion of this reviewer that an all dark or black paintfill on the rear flange of the putter would make for a cleaner and classier look, but let’s be honest, paintfill is easy to change. 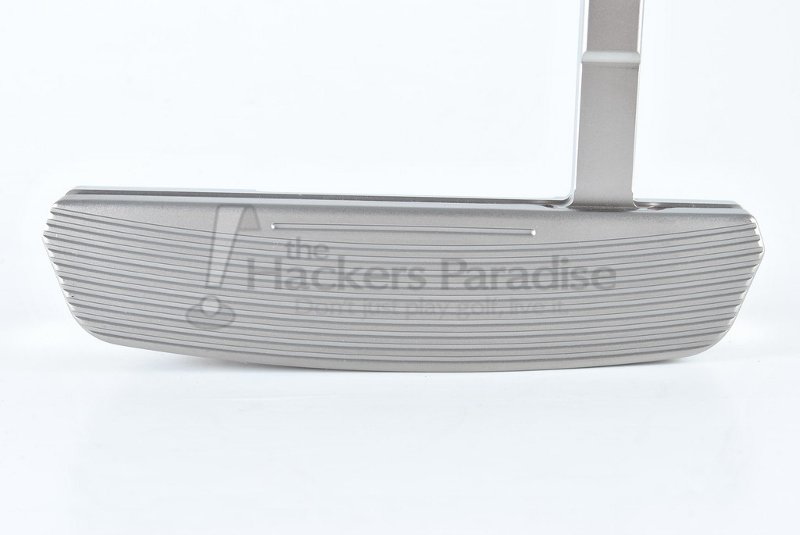 This is the “bread and butter” of the Sentio philosophy, if you will. As discussed about the general idea behind the Sierra 101, the insert and face cap are the major factors at work here. Since the goal of the line is to provide a feel/roll option for everyone through three different insert options, it is worth breaking down what was seen in testing by the insert version.

o   The green insert has the lowest compression rating of the three different versions and the target audience are golfers who typically play inserts and/or on faster greens. The sound/feel off of this version is most definitely the lowest pitched of the three and as such has the most “plush” feeling through impact of the stroke. During review, this is the version which received the most comments on the feel as the ball really seems as if it almost lags on the face due to the dampening aspect of this insert. Where the roll is concerned, the 304SS face cap does a great job of imparting a quick forward roll, but the density of the insert makes it feel as if there is still a lot of control/touch. 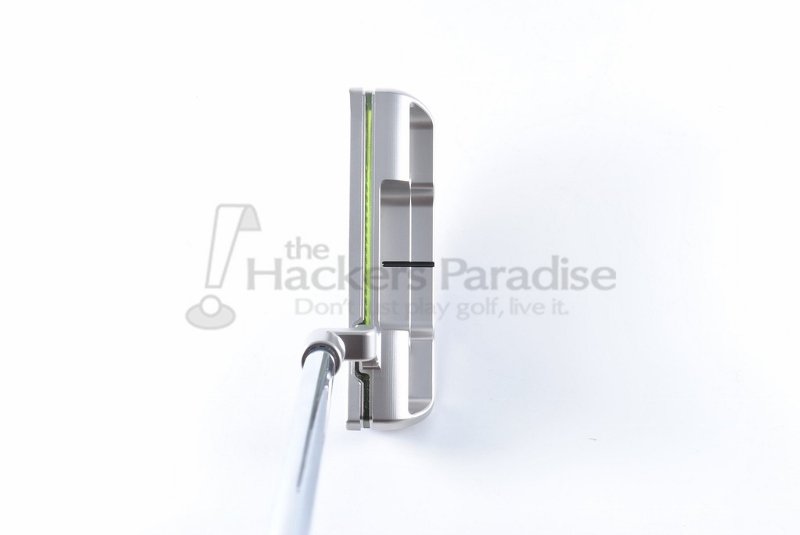 o   The red insert is the “tweener” option, meant to be the all-around choice for those who play on a variety of conditions and seek more audible feedback than a traditional insert, but not overly firm. For this reviewer, the red insert actually situated itself much closer to the blue (firm) insert than it did the green (soft). It has a livelier sensation at impact, with a much sharper/higher tone than the green. As was expected though, the 304SS face cap still imparts an extremely quick and true roll regardless of what the sound/feel is telling you. 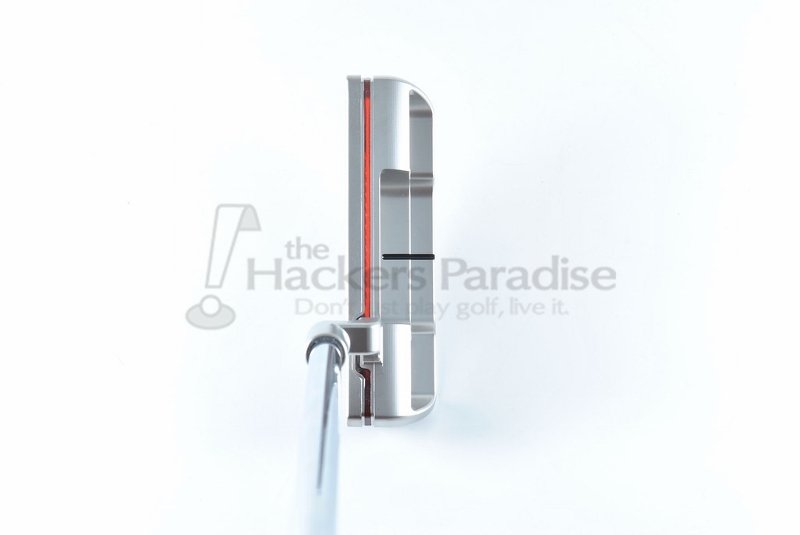 o   The blue insert is on the most firm end of the option spectrum for Sentio. The purpose of this is not just for people who want a much more solid overall feedback, but also those who putt on slower greens. At impact it imparts the most pronounced “click” of the three options and because the face cap is stainless, it really gives a feedback much closer to a milled putter than an insert. As for roll, for this reviewer this one was the “hottest” feeling of the three versions and despite featuring the same quick roll as the other two, mentally, this one seemed to let the user feel much more capable of putting enough pace on the ball to get it to the hole on both slower and recently aerated greens. 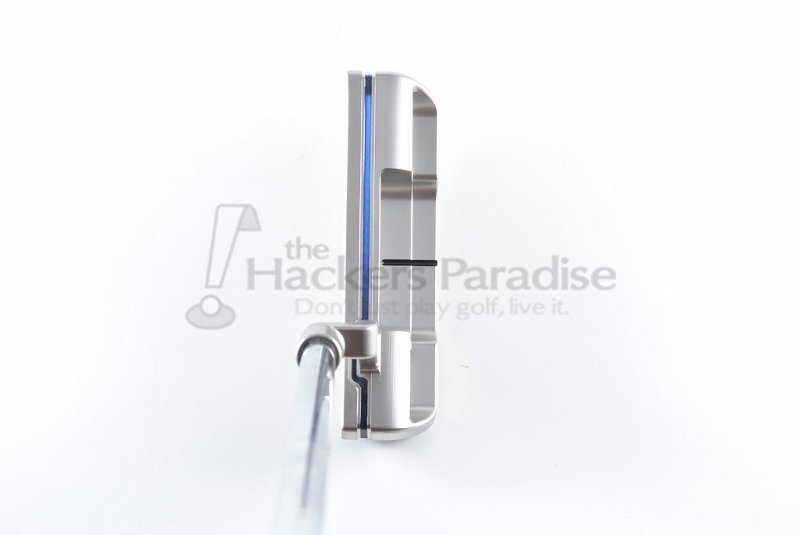 The Sierra 101 is a very well balanced blade putter and the full shaft offset of the plumber’s neck makes it very comfortable for anyone used to a traditional blade setup. Through the stroke though is where it shines, and not just because of the insert. Sentio put a ton of emphasis on manipulating the weight in the head to up the MOI, and when combined with the unique groove pattern on the face, misses were met with very good distance and directional control. It is worth mentioning that with all three versions, the more horizontal on the face the strikes get (heel/toe sides), the more deadened the overall feedback seems to become, in large part due to the variable depth of the face cap.

In all, Sentio understands that putters are incredibly personal, and they also embrace that their design will not be for everyone which is refreshing to see. The only place of concern for this reviewer is accessibility of the design for people to not just try, but to see in hand. Sentio fully believes in the technology and design that they have brought to market and have already shown their willingness to explore additional finishes and even designs (they have hinted at a mallet version coming at the 2017 PGA Show). The Sierra 101 models do come in at a higher end price point at $299.00, but for the quality in hand that truly is not anything outlandish, though as consumers we all have our own price point limitations and that is totally understandable. Also worth mentioning, should one decide they purchased the incorrect insert version for their needs, Sentio allows for a free one time swap within the first 30 days.

It truly will be interesting to see where the company, and the tech, goes from here. More information on the Sierra 101 putters and all that Sentio does can be found on their website, www.SentioGolf.com.