Squares are better than circles? It is amazing how such a simple statement can cause a whirlwind of talk and speculation. However, that is precisely what Cleveland Golf has stirred up with the marketing campaign that lead into the debut of their new Smart-Square Putter.  The move to say you’ve taken the principal of another putter design and made it better, while also acknowledging just how successful that previous design has been in the past, is both gutsy and brilliant. This industry is built on taking ideas and making them better, and that is exactly what Cleveland believes they have done with the Smart-Square.

FROM CLEVELAND ABOUT THE SMART-SQUARE PUTTER:

Two parallel lines extend from the center of the face to frame the ball perfectly down the line, and two perpendicular lines offer instant feedback when the putter is mis-aligned at address. The result is faster, more reliable alignment on every putt.

The basic design of the Smart-Square putter should be somewhat familiar to everyone, and not in the way that many might assume. Although the principle for the alignment setup may have originated from another putter, it is very clear that the actual footprint and design for the Smart-Square putter is a more compact version of a putter that they had in their line last year, the Never Compromise Sub 30 series Type 50. Though the shape itself is a high MOI mallet design, which provides for less distance loss on mis-hits across the face, it also manages to maintain a very nice overall footprint. The Smart-Square is definitely not going to be mistaken for anything but a mallet, but it is nowhere near the size of many other full mallets that are on the market. 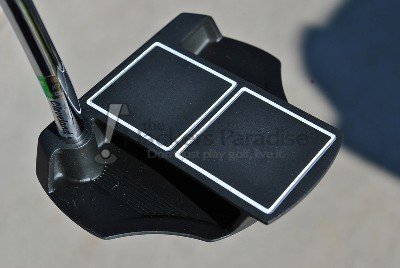 From a finish standpoint, Cleveland Golf clearly decided to take an all-business approach with the Smart-Square and made sure the focus is on the Dual- Axis alignment setup. From address the putter is cloaked in a very nice matte black finish that completely prevents glare while on the course, a very nice decision since glare on the larger surface area of a mallet would be exponentially more problematic for a golfer than on a blade design.  The sole of the putter is finished in a combination of glossy and matte black that looks incredibly clean when pulling the putter from the bag. The best part for me here is that Cleveland did not do anything from a paintfill/finish/engraving standpoint that could possibly take away from the design itself. So many companies get too flashy, but this is clean and to the point. 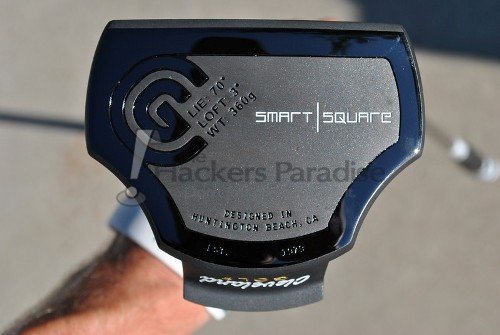 Cleveland chose to go with a Winn grip for the Smart-Square, not at all a surprise and a very solid go-to grip. From a design perspective, they again followed what they had done with the head, simple and clean with minimal graphics and a black and white color scheme. As far as the headcover is concerned, it is a well-made basic mallet headcover, but with the addition of the Velcro closure being a square that matches the alignment squares on the top of the putter – a simple yet clever twist. 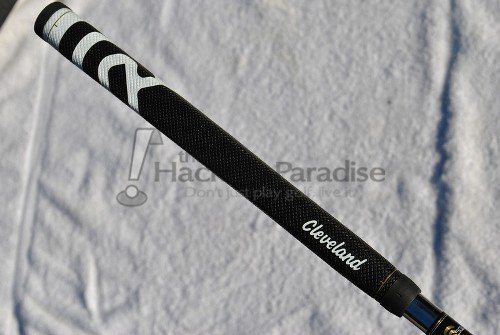 Cleveland is referring to the alignment system on the Smart-Square putter as “Dual-Axis Alignment”.  The principle behind the Dual-Axis setup is that the combination of parallel and perpendicular lines of the two squares serve as a multi-purpose alignment setup and it absolutely does.  In essence, though the squares may initially look to be the same setup as the two-circles so many golfers are familiar with, the squares are quite a bit different.

Through testing with multiple users the consensus was overwhelming that use of the lines that run parallel to the golf ball provided an incredibly clean visual and significant amount of comfort for aligning the putter toward the intended target. In addition, the perpendicular lines may have the most impressive performance advantage in that the four lines provide immediate feedback as to the face angle of the putter. If it is open or closed at address you know it right away and can correct it accordingly. It can definitely be said that this effectiveness likely has a large amount to do with the two squares being only outlines and not completely filled in shapes like with other similar circular alignment setups. By keeping the squares as outlines, all of the lines are allowed to have an impact aiding alignment and face angle. 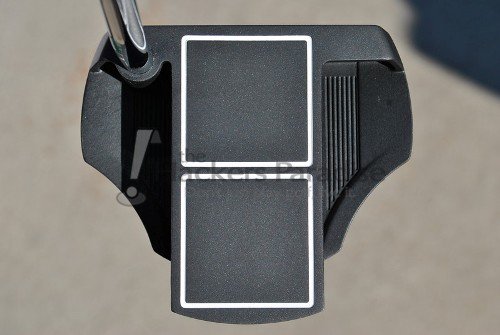 One of the common issues for many with mallet style putters is the overall weight being too much and giving the feeling of the head driving through the stroke or it being too light and not being felt anywhere through the stroke. By going with a weight of 360g in the standard version Cleveland seems to have addressed this very well, as the head is easily felt throughout the stroke without ever giving off the feel of being too much or too little. Rather, the head simply flows throughout the stroke if the user allows it to and doesn’t get in the way with any manipulation. Cleveland walked a fine line in this area with the Smart-Square and did so very well. 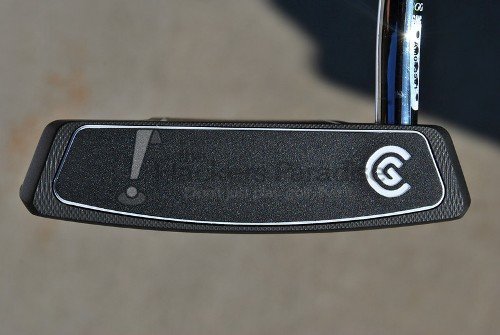 Inserts in putters are a funny thing, as there may not be another area with putters where people are so specific about what they like/don’t like. In prior years’ putters, the inserts used by Cleveland, while putting a nice roll on the ball, have had a very dull sound at impact, making it feel like a very soft putter face. One of the things Cleveland specifically set out to do with the Smart-Square was to improve the sound/feel of the insert while maintaining that nice forward roll. That goal has been achieved with this version of the copolymer face as it has a bit of a ‘click’ to it now, which gives a firmer feeling upon impact. It is still not the point of a milled face, but it sits right between that and the extreme softness that some of the most popular inserts on the market possess. Though it may not fit everyone’s ears for feel, it certainly should fit a much broader margin of amateurs than not. 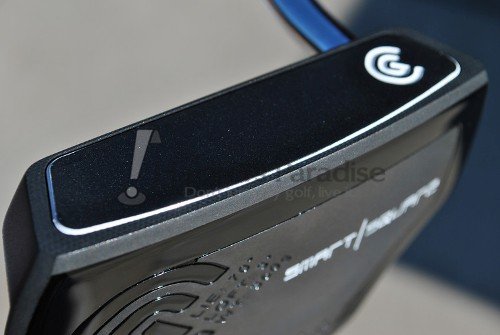 The Smart-Square putter will undoubtedly be pre-judged by some extent simply because of the circles versus squares marketing and the way that some jump to conclusions. However, why shouldn’t a company be more aggressive in their marketing, particularly if they truly believe their product is an improvement on a previous idea? The fact of the matter is that the Smart-Square is just that, an incredibly effective improvement. The use of the hollow squares presents not only a down-the-target-line alignment aid, but it also provides a face-angle visual that could truly be a game changer for amateurs that struggle on the greens. The key to the Smart-Square will be getting it into the hands of people and getting them to pass judgment only after putting it through its paces.

The Smart-Square putter will be offered in both heel and center shafted versions, as well as standard weight/length and Almost Belly versions. For more information be sure to check out www.clevelandgolf.com.